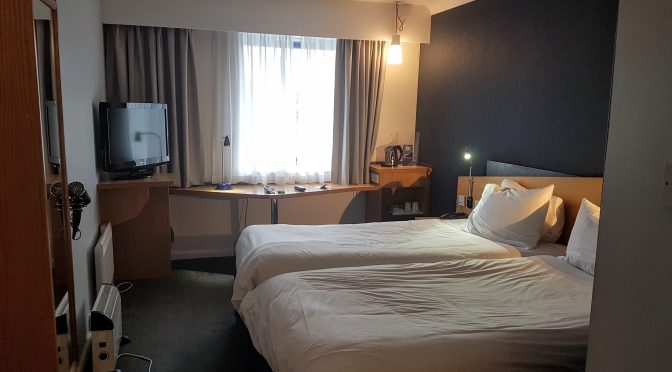 Unsurprisingly, it has been a little quiet on here of late. Like most of you, I’ve not been travelling all that much since the COVID-19 pandemic began. In fact, I’d hazard that as I don’t have a car and I am able to work from home, I’ve travelled far less than most, the furthest afield being about an hour’s walk away from home to get a rare bit of exercise.

Until this past weekend.

For family reasons I had to head down to Swansea for a few days, which meant finding somewhere to stay, and I ended up at the Holiday Inn Express, Swansea East, located just off junction 43 of the M4 motorway. I have stayed here once before with Lucy, a couple of months before we got married (I think it was when we were sorting out her hair and make-up trial for the wedding), and knew what to expect normally, but not what to expect during the pandemic.

The first thing to note as I drove down was the difference in policy on face coverings between England and Wales. England requires face coverings in public indoor spaces, but Wales does not. However, on the front door of the HI, there was a prominent sign to say that face coverings are required in public spaces in the hotel.

I donned my mask and entered to check-in.

As I checked in, the changes to service were explained to me. Firstly, there is no housekeeping except by request the day before it is required. Secondly, there was no sit-down breakfast, but a ‘grab and go’ to take back up to the room to eat (or take away).

I made my way up to the room which was the same as pretty much every other Holiday Inn Express room I’ve seen, but with one exception. There was no chair at the desk. I assumed this was also due to COVID-cleaning, but in retrospect I should have checked as it meant any writing, work on my laptop, or eating would have to be done either standing up or on the bed, and who likes crumbs in the bed?

The enhanced cleaning hadn’t extended to the thick layer of dust behind the support for the LED lamp over the bed, but a wipe soon sorted that out.

The grab and go breakfast was just an average breakfast buffet. There were croissants, yoghurt, fruit, cereal and either bacon or sausage baps (one or the other each day, not both) as the only hot option. There was no vegetarian hot option. Not a problem for me, but if I’d been travelling with Lucy there would have been comments.

In the evening the restaurant area was open with a limited menu and was participating in the “Eat Out to Help Out” programme, which provides 50% off food and soft drinks up to a limit of £10 on Mondays to Wednesdays in August. Last time Lucy and I stayed here we had eaten in the restaurant, and I did the same again with a pizza.

That’s pretty much it. I was there for three nights so I managed without housekeeping, but bought a tin of coffee from a supermarket as the instant coffee in the room didn’t last long. It was an uneventful stay and I slept well in the bed (there is no air conditioning in the rooms, so I had to leave the window open overnight as it was rather humid in mid-August). Though I am left wondering how much “enhanced cleaning” the rooms actually get (and I’m sceptical of that at most places that claim they are doing it).